Accurately comparing the performance of energy disaggregation (Non-intrusive Appliance Load Monitoring) methods is almost impossible unless the same test data is used. For this reason, a team at MIT have built The Reference Energy Disaggregation Data Set (REDD). A few weeks ago, an initial (v1.0) snapshot of this data set was released for use in academic work. The paper describing the equipment used for data collection is:

The dataset contains data for 6 houses. For each house: 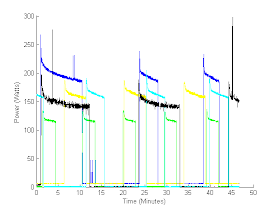 Almost all fridges have a different power demand, duration of use and periodicity. However, interestingly, they all share an identical model of usage, in that they all exhibit similar cyclic behaviour. For each fridge, the cycle begins with a single increase in power, which gradually decreases during the cycle and finally ends sharply. Although not ideal, this is encouraging for the purpose of general appliance models. Such a general model of fridges could be built, and would only need to be tweaked in order to match a specific fridge's signature.
Oliver Parson at 16:48
Share