Later this week I'll be giving a talk at the Energy Futures Lab on the recent work we've been doing around the data collected from smart meters and the Hive ecosystem. Here are the important details:


The ongoing national rollout aims to deploy one smart meter to every home in the country by the end of 2020. Furthermore, the market for connected household devices, such as automatic and remote controlled heating and lighting, continues to grow each year. As a result, more and more data is being collected about how we live our lives. This talk explores how machine learning can be used to extract value from this data improve our lives, but also highlights the importance of customer consent and keeping this data secure.


The seminar will be held in Room 116 of Electrical and Electronic Engineering (building 16 on the campus map). The room is known as the Energy Futures Lab teaching area (or The Bunker). If you are entering the building from Dalby Court/through the building's main entrance the room is down a flight of stairs, through the double doors on your left hand side, turn right at the end of the corridor and it is the second door on your right.

"NILM is a challenging problem. But it’s not impossible." This was one of Prof Bin Yang's five concluding messages of his keynote talk at EU EPRI NILM 2016. I think this sums up pretty much every NILM researcher's feelings, but lets face it, there wouldn't be much much need to hold such a conference if NILM was an easy problem. In his talk, Bin started with the fundamentals of source separation, and went on to relate energy disaggregation to a number of other separation problems, including image segmentation and speaker diarisation. Our other keynote talk was given by Chris Holmes of EPRI, who described their motivation for co-organising the workshop, as well as their recent work in evaluating a large number of NILM vendors in both North America and Europe.

In addition to the two keynote talks, the workshop featured 25 other talks from NILM vendors, academics and utilities. The workshop was attended by roughly 100 people across the two days, from countries far beyond Europe, including Japan and Korea. While we did our best to live stream the event, bandwidth limitations affected the audio and video quality on the first day, but the stream made a miraculous recovery for the second day. A playlist of (most of the) individual presentations is available on YouTube:

I personally really enjoyed the event, and given the attendance numbers and feedback we've received so far, I think it confirms the demand for NILM-focused events on both sides on the Atlantic. Having said that, I hope to see you all next year, and don't forgot to bring your NILM bingo card ;) 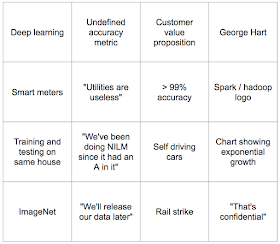 The stream of day 1 of the EPRI EU NILM workshop is now live:

Update 21.10.2016: A playlist of individual presentations is now available on YouTube:

Unfortunately the lack of bandwidth at the venue meant only 19 of the 27 talks were of acceptable quality. Apologies to the speakers to the other 8 speakers!
Oliver Parson at 10:32 No comments:
Share
‹
›
Home
View web version