I've read a couple of papers recently about using minimal sub-metering to enhance the accuracy of NIALM. They are:
This problem introduces an interesting trade-off between disaggregation accuracy and physical intrusion. I've definitely wondered where I should be installing appliance plug monitors in my home, and this type of approach potentially provides such answers.

However, I can't help but feel that any intrusion beyond the installation of a household-level monitor prevents the scalability of this technology. I accept that 100% disaggregation accuracy for a previously unseen household with a single aggregate meter is likely be to impossible. However, I find software solutions far more compelling than hardware solutions, due to their ability to scale to any data set containing a single stream of aggregate readings. Furthermore, I think the state of the art in unsupervised NIALM is still far from the best that can be achieved, and there are still many algorithmic improvements to be made.
Oliver Parson at 09:02 1 comment:
Share

I was recently asked how energy disaggregation in the residential sector compares to the commercial and industrial sectors, since the majority of academic research focuses on domestic energy consumption. This got me thinking about the major differences, and why academic research focuses on disaggregating household appliances, so I decided to collect my thoughts here.

As a general rule of thumb, I think of a commercial premises (e.g. a shop, office or restaurant) as consuming roughly an order of magnitude more energy than an average household. Clearly there's a huge variability here, but I think it's a fair assumption given that, in general, there are more people spending more time in these premises. I think industrial premises are bound to consume even more energy than commercial premises, given that a single type of machinery could quickly consume more energy than a household or shop could in a day. This would surely make energy disaggregation more attractive in these settings, given the greater potential for energy savings.

I'd expect commercial and industrial premises to contain many more electrical loads compared to a household. As a result, it's likely that more loads will be run simultaneously, and also more duplicate appliances will exist within a single premises. This clearly increases the complexity of the disaggregation problem. However, I'd also expect these types of premises to show a higher correlation over daily and weekly cycles, and further similarities are likely to exist between chains of commercial premises. These differences clearly change the focus of the disaggregation problem, and would likely require different approaches to feature selection and parameter learning.

Given the greater potential for energy savings, the scenario becomes quite different to that of household energy disaggregation. There's clearly an argument for greater investment in monitoring equipment, such as higher frequency sampling or sub-metering. It might even be financially viable to monitor each load individually in an industrial environment, since the cost of the energy monitor is much lower in comparison to the size of the load. This begs the question of whether NIALM is even necessary in such situations.

In my opinion, the domestic scenario is made far more compelling by the smart meter deployments mandated by many governments around the world. This means that household electricity data will soon be available at huge scales, and therefore there will be huge potential for advances in disaggregation algorithms. Conversely, commercial and industrial premises owners probably care relatively little about the electricity costs, as a result of the small cost to their business compared to other factors. I think these points help to explain why academic research has so far been concentrated around energy disaggregation in residential settings.
Oliver Parson at 11:53 No comments:
Share

Without attending an international conference, it can be hard to get an idea for how localised the interest in a technology might be. To this end, I've shared the following map of the visits to this blog over the last two years: 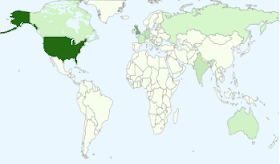 The two darkest countries are the United States and the United Kingdom by a long a way, which doesn't particularly surprise me. The next band of interest seems to be from western Europe, Canada, Russia, India and Australia. I think this represents the nationalities of most of the people I've met and that of authors of papers I've read fairly well.

I know that colouring countries isn't an ideal representation of interest over a geographical area, but I didn't want this to turn into an exercise in statistics.
Oliver Parson at 15:56 No comments:
Share
‹
›
Home
View web version